This section will highlight noteworthy landscaping, both public and private, in northern New England. The accounts below, both written by Robert Gillmore, describe two projects by landscape architect Mark Rynearson of the Rynearson Company in Goffstown, New Hampshire.

A Naturalistic Garden that Swings*

I was delighted to see several fine bits of design on the Goffstown Community Garden Club’s local garden tour.

The highlight of my day, however, was the superb vignette at the entrance to Bill and Susan Tucker’s home on Tipping Rock Road. This shady garden is a long trapezoid tucked between two radiating wings of their house, which is faced entirely with large, handsome fieldstones.

The garden is naturalistic landscaping at its best. The poet Alexander Pope, a prophet of the so-called English Landscape School, told gardeners to “consult” the “Genius of the Place in All.” By that Pope meant that designers shouldn’t simply impose a garden on the land like paint on a blank canvas but, instead, should build upon the “Genius,” or special character, of the site.

That type of landscaping is often less expensive than other kinds because it makes use of what nature provides: the rocks, plants, etc. already on the site.

Also, naturalistic gardens are usually low-maintenance landscapes—sometimes they largely take care of themselves. Even more important, they exploit the best features of the site to achieve powerful emotional effects.

The “Genius” of the Tucker entrance site is low, handsome granite ledges, speckled with lichen, and fringed, as granite ledges often are, with large patches of low-bush blueberries, ferns, Canadian mayflowers, and violets. In nature, many of these sorts of ledgy sites (mountaintops, for example) are already neat enough—already sufficiently gardenlike—so they can be made into nearly perfect naturalistic gardens with very little work.

The Tucker entrance garden was designed by Mark Rynearson of Goffstown (who co-designed the Display Garden at Uncanoonuc Mt. Perennials.) Mark did three main things:

First, he “consulted” the “Genius of the Place” by incorporating the existing ornamental assets of the site—the ledges and most of the plants around them—into the design.

Second, he added huge granite fieldstones beside the existing ledge. These enormous stones—most of them five, six, or seven feet across at their longest axes—are big and handsome enough to resemble natural ledge themselves; but they’re also just flat enough to walk on comfortably. Both the new fieldstones and the existing ledge do triple duty: They’re a strong gray rock foil to the plants around them; they’re a pleasing echo of the walls of the house; and they’re a splendid naturalistic walkway.

Third, to provide interest in the “middle layer” of the site, Mark added two huge sweeps of evergreen shrubs: holly in the shadier part of the garden, nearest the entrance door, and junipers in a sunnier area near the base of the trapezoid, away from the door.

The magnificent sweep of holly, with its dark, shiny leaves, is now 20 feet long; the juniper is now 16 feet across. The powerful, satisfying effect of these big shrub masses complements the even more powerful, even more satisfying mass of the ledges. Because the shrubs are evergreen, not deciduous, this effect works year round.

The massing proves, once again, one of the most important—and, by homeowners, too-often-overlooked—rules of landscape design: that a landscape garden (as opposed to a collector’s garden) should be made of just a few varieties of plants, and each variety should be grouped together. The alternative—mixing varieties within one group—creates a visual Babel whose effect is either disquiet or simply no emotion at all.

There’s also a mountain laurel and a witch hazel on the site. They’re both native plants, and they could well have been growing on the site before it was landscaped. Or they could have been added.  We can’t tell—just as we can’t always be sure which rock in the walkway was preexisting and which was added.

This often-seamless marriage of preexisting (“natural”) and exotic, human-made features is typical of fine naturalistic gardening.

It reminds me of the Asticou Terraces in Northeast Harbor, Maine.

Like the Asticou Terraces, the Tucker entrance needs almost no care. Its shady location; its native and naturalizing exotic plants; its natural mulch of pine needles; and its masses of evergreen shrubs, which create their own canopy and shade out weeds, all help make it a low-maintenance garden.

Above all, the Tucker entrance shows us the big difference between horticulture and landscape gardening. Horticulture is about raising plants. Landscape gardening is about using plants to create powerful emotional effects, including what was once commonly called the beautiful, the sublime, and the picturesque.

In landscape gardening, the plants are not an end, but a means. The end—if you are so lucky—is landscape art. About one art—music—Louis Armstrong warned us: “It don’t mean a thing if it ain’t got that swing.”

Like good jazz, great gardens are more than horticulture: Great gardens swing. Because they look and feel “right,” they make us grin with delight.

* The original version of this article appeared in the July 25, 2002, edition of The Goffstown News.

The Display Garden at Uncanoonuc Mt. Perennials is actually much more than an exhibit of some of the plants it grows and sells at its nursery on Mountain Road in Goffstown, New Hampshire.** It’s also an all-too-rare example of superb landscape design.

The garden is located on a low mound just off the parking area. You enter it by climbing up a very short, very gentle grade, partly on wide fieldstone steps. This quick ascent helps to give you a clear sense that you’re entering a different space—a special garden—not only physically separate but distinct in character from the rest of the nursery.

This welcome sense of differentiation is enhanced by the large shrubs and specimen trees planted along the edges of the space. They help screen out the rest of the nursery, so once you’re inside the display garden, your attention is mainly on the garden—and almost nothing else.

This screening illustrates an essential principle of landscape design: A landscape isn’t just the land on which the landscape is created. It’s everything you can see from that land.

If, for example, you can see cars and telephone poles and other people’s houses from your garden, then those things are every bit a part of your landscape as your flowers. To preserve the integrity—the unity and special character—of a landscape you need to screen out anything that doesn’t relate to it.

The smaller plants in the Display Garden (mostly perennials) are arranged in large groupings—what designers often call sweeps, or drifts—and each group consists of just one variety of plant. It perfectly illustrates another design rule of thumb: One sweep, one plant.

Perhaps the biggest mistake made by lay gardeners is that they do the opposite: They put way too many different varieties of plants in one group. That makes the garden confusing: There are no focal points. So many plants are competing for attention that the eye doesn’t know what one to look at first. Rather than making the garden restful or soothing—or a powerful statement of any kind—the plants have no emotional effect at all. The garden may be perfectly groomed, but visually it’s a mess.

The Display Garden also makes optimum use of bark mulch. Mulch does many practical things: It suppresses weeds, keeps soil moist, and adds nutrients (thus reducing the need for weeding, watering, and fertilizing). But the fine, dark mulch that covers the ground between the plant groups also unifies the space, because—like a solid sweep of plants—it carpets the space with uniform color and texture. It’s also the most pleasing bark mulch because it’s the most natural looking: It looks like top soil, which is what you expect to see in a garden. (Unlike red or other dyed bark mulch, which looks surreal.)

The Display Garden is also enhanced by artful use of stone. Large stones are nature’s sculpture. Like trees and evergreen plants, it gives a garden year-round structure and interest—especially valuable in a perennial garden, which would otherwise be a bit bare before the flowers appear in the spring and after they wither away in the fall.

Most of the garden’s large, smooth stones enter the ground at or near their widest point, thereby creating the illusion that, like the tip of an iceberg, they’re just the top of a much larger rock—or even ledge—that gets wider as it reaches deeper into the earth. This illusion—that the garden is a part of something massive and permanent—helps gives it a powerful sense of peace and rest.

This effect is the very opposite of that created when stones are merely dumped on the site, often resting on top of (not in) the earth at their narrowest point. As Frank Lloyd Wright said in another context, these misplaced rocks are on the site, but not of the site. They’re obviously not part of a larger stone or ledge that predates the garden. In fact they’re the very picture of impermanence. They look as if they could be spun around like tops.

Equally artful are the Display Garden’s occasional flights of stone steps. They’re luxuriously wide—two feet or more—and the height between them is low, only about six inches. As a result, climbing them is effortless. They not only look graceful, they feel graceful. They illustrate another rule of thumb: The easier it is to walk through a garden, the greater its pleasure.

Afinal note: Some sections of the garden path are bordered by squat, square stakes connected with rustic-looking rope. This low, Japanese-style edging is just high enough to keep visitors from trampling delicate plants. But it’s also low enough to be unobtrusive and to draw the eye along the ground, thereby echoing and emphasizing the low horizontality of the perennials while also making them seem “higher.”

The garden is a co-production of Mark Rynearson, a landscape designer and contractor, and his wife Annette (“Nettie”) Rynearson, who runs the nursery. They met as undergraduates at Cornell, where Mark majored in landscape architecture, Nettie in horticulture.

* An earlier version of this article appeared in the July 9, 2013, Union Leader.

** To the surprise and disappointment of many of her many customers, Nettie Rynerson closed her nursery in 2017. 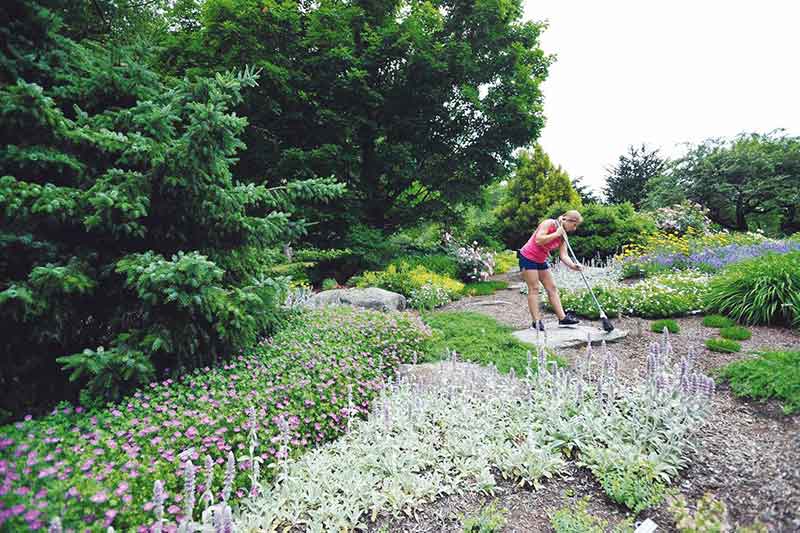