Sweeps of ‘Roseum Elegans’ rhododendrons line the wide paths through the Birchwood, which are kept smooth by mowing

How the Birchwood Is Maintained

A great paradox of the Birchwood (and its sister garden, Evergreen) is that its lush landscape of large trees and sweeps of hundreds of shrubs demands only a fraction of the care required by typical lawn-and-flower gardens.

Unlike annual or perennial flowers, which need to be planted, mulched, watered, fertilized, weeded, deadheaded, divided, and groomed, the Birchwood’s trees and shrubs largely take care of themselves.

Even better, most of these trees and shrubs are part of a woodland garden, which is a nearly self-sustaining ecosystem—almost like a natural forest.

Even the sunnier parts of the Birchwood need little care. There are many fewer trees here, of course, so mulching isn’t automatic. Mulch must be added. But just as in the woodland garden, the added mulch fertilizes the soil, keeps the ground moist, and suppresses weeds. As a result, the trees and shrubs planted here need little care.

What’s more, the solid sweeps of shrubs planted in these sunny areas also create their own canopy. Just like the tree canopy in the woodland garden, shrub canopies help shade the topsoil from sunlight. Like all shade, it suppresses weeds and helps keep the soil moist, thus virtually eliminating the need for watering.

Evergreens create the most effective shade canopies because their leaves remain on the plants year round. But the larger any shrubs grow, the more shade they create.

Like Evergreen, it regularly requires a bit of the same gardening by subtraction—cleaning up, weeding, and pruning—that created it. (See How the Birchwood Was Created.)

But unlike Evergreen, the Birchwood also has some grassy areas that need mowing.

By definition, woodland gardens have many trees, and it’s inevitable that at least a few branches will break off and fall to the ground every year. Sometimes even entire trees will topple over.

The Birchwood creates more tree debris than many other woodland gardens. That’s  because a majority of its trees are gray birches, which live an average of only 30 years. Each year more than two dozen gray birches suffer the ravages of their old age. A few topple over, roots and all. Others lose only their tops, which simply snap off from their main stems and crash to the earth. The mostly younger, mostly healthier specimens that remain nevertheless shed countless branches, large and small, dead and alive.

All this debris needs to be picked up and thrown over the edge of the steep slope at the northern edge of the garden. There, just like the famous briar patch that provided protection for Br’er Rabbit in the Uncle Remus story, the messy pile of tree parts provides excellent shelter and nesting sites for birds and other small wildlife.

And when this debris eventually decays, it adds humus and fertilizer to the soil.

Few unwanted plants grow in the Birchwood’s natural (and non-natural mulch) and in the shade of its tree and shrub canopies. Happily there are only two major exceptions to that proposition.

One is the native ferns that grow prolifically in the garden’s moist woodlands. Most of the ferns are welcome—the large, low, gardenlike sweeps of New York fern, for instance, are among the garden’s most treasured plants. But even New York ferns grow where they’re not welcome—onto paths, for example, or so close to trees and shrubs that they overwhelm them and make the garden look messy.

Larger ferns also grow within the sweeps of New York fern, spoiling their powerful simple effect. Most of these intruders were weeded out when the garden was created (see How the Birchwood Was Created). But reinforcements arrive relentlessly, and equally relentlessly they need to be weeded out as soon as they appear.

The other major unwelcome plants in the Birchwood are the tree seedlings (mostly maples) that pop up in the relatively sunny northeastern edges of the woodland garden. Just as large ferns spoil the sweeps of New York ferns, these stubby woody invaders ruin the beauty of lovely gardenlike carpets of moss. Many of them can be pulled out by hand or with a Weed wrench. They can also be removed with a lawn mower. With its blade set high, the machine will mow down all the seedlings and leave only the moss.

The Birchwood’s hundreds of rhododendrons mostly thrive in the garden’s moist, lightly shaded woods. But the Birchwood is also swept by fierce winter winds, which can dry out at least some of their leaves and turn them an unsightly brown. Branches with too many brown leaves must be pruned away in the spring.

Also, as the rhodies get bigger, some branches grow so close to the paths that you can’t walk by without brushing against them.  These too must be pruned back.

The Birchwood is a lightly shaded garden because a majority of its trees are birches, and—unlike maples, for instance—birches have relatively thin crowns of relatively small leaves. This light shade plus the garden’s moist ground allows large patches of both moss and grass to flourish on many of its paths.

These soft, luxurious moss-and-grass footways are a pleasure to traverse, and the low, smooth, flat pathways are an excellent foil for the billowing sweeps of shrubs and ferns rising beside them. In a nice visual symbiosis, the plants define the paths and the paths define the plants.

To keep the paths smooth and neat—and free of any invading plants—they’re mowed every 2 or 3 weeks with a small, walk-behind mower with its blade set high. As with the maple seedlings above (see Weeding), the mower evens out the grass but leaves the moss unscathed—and more visible.

Finally, the grassy road that runs through the center of the Birchwood, as well as the sunny meadow at its northern edge are cut with a riding mower.

Just as the garden’s smooth mowed paths nicely offset the shrubs beside them, the smooth shorn meadow is a fine visual base for the mountains rising to the horizon above it.

The open meadow also allows plant debris to be driven to the steep slope at the edge of the meadow in a pickup truck, where it can be thrown over the edge (described in Cleaning Up). 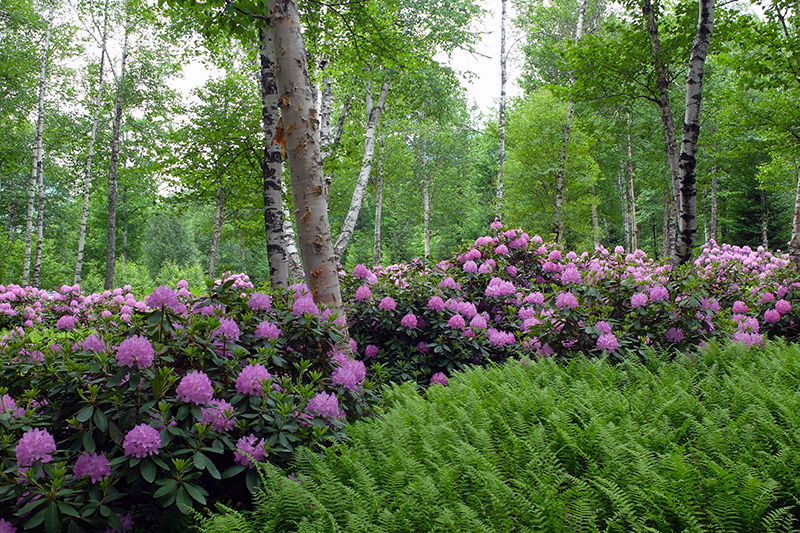 A long sweep of ‘Roseum Elegans’ rhododendrons is defined by massed New York ferns (Thelypteris novaboracensis). The solid sweep of ferns is maintained by weeding out other ferns, whose presence would destroy its neat, gardenlike unity.