How Evergreen Is Maintained

One of the wonderful ironies of woodland gardens like Evergreen is that these lush landscapes of large trees and shrubs—with more plant mass than any other kind of garden—demand only a fraction of the care required by flower beds and grass.

Evergreen doesn’t need mowing, for instance, because it has no grass.

Nor does it need mulching or fertilizing. That’s because its big trees produce huge numbers of leaves and needles; and when this foliage dies and falls to the ground, it forms a thick layer of natural mulch.  (And unlike artificial mulch, it doesn’t need to be spread: nature spreads it for you!)

Evergreen’s natural mulch, plus the shade created by its big evergreen trees and massed evergreen shrubs and ground covers, helps keeps its soil so cool and moist that rain and snow melt alone provides virtually all the water it needs. The natural mulch and heavy shade also suppress weeds.

And when the mulch eventually decays, it becomes natural fertilizer.

Another paradox of woodland gardens like Evergreen is that, even though they grow huge crops of leaves and needles, they require little raking (see Cleaning Up, below). On the contrary, most of their leaves need to be left where they fall, so they can mulch, and eventually fertilize, the garden’s plants.

Finally, Evergreen’s trees and shrubs also need little care because, unlike grass and annual and perennial flowers, they largely take care of themselves.

Rather like a wild forest, Evergreen is a self-sustaining ecosystem: nature’s perpetual motion machine, a marvelous natural appliance that goes—or grows—almost by itself.

Like other woodland gardens, however, Evergreen regularly requires some of the same gardening by subtraction—the same cleaning up, weeding, and pruning—that it needed when it was made. (See How Evergreen Was Created.)

In a woodland of many massive trees, at least a few branches—mostly small and mostly dead—inevitably break off and fall down. Sometimes large branches also drop, and occasionally even entire trees topple over. All of this debris needs to be carried away.

As noted above, most of the dead leaves and needles at Evergreen can be—actually should be—left where they fall among the plants, where they provide mulch and, later, fertilizer. But leaves that fall on the trails usually need to be raked up.

Some paths—especially those under the largest pines in or near the Northeast Niche—are often covered with a handsome smooth, solid carpet of brown pine needles; these often look better if they’re left alone.

Most of the trails, however, acquire a rough coating of at least a few brown leaves, or a motley mixture of needles and leaves, and—unlike the pure, solid carpets of brown needles—they make the garden look messy and unkempt. A smooth, leaf-free footway looks better than one coated with dead leaves; and a bare dirt path creates a sharper contrast with, and therefore better enhances, the plants beside it.

Also, a leaf-free footway is less slippery than a leaf-covered one—especially if it isn’t level.

Some of the unwanted leafy litter can be raked into ground covers edging the paths, where it will provide valuable extra mulch. However, you can add only as many leaves or needles to the plants as their foliage can conceal. Pachysandra (Pachysandra terminalis), for instance, hides mulch quite well because it rises several inches above the ground, and its wide, horizontal leaves provide ample screening; vinca (Vinca minor) offers less cover because it grows close to the ground, and its leaves are much smaller.

Evergreen’s granite cliffs and boulders are part of its natural sculpture and, like any sculpture, they look best if kept completely free of needles and other tree litter. To make the cliffs and rocks as impressive as possible, they need to look as large as possible; and you make that happen by removing the thick layer of needles that often accumulates on the ground around their bases and frequently covers up several inches of rock.

These and other needles in the wrong place can be easily collected and used as a very attractive mulch around newly planted shrubs—or wherever else it’s desired.

The streambed looks best if it contains only falling water, rocks, and perhaps a few ferns. That’s why all the dead leaves, sticks, and other tree litter that inevitably clutter up the brook must be removed—sometimes with a rake, sometimes with just fingers; waterproof gloves reduce chafing of wet, cold hands.

The more numerous intruders include maple seedlings, easily identified by one or two miniature five-pointed leaves attached to string-size stems. When the seedlings are little, they’re easy to overlook. But as they grow, of course, they become more conspicuous and ever more unwelcome. Happily, they can be pulled up easily, root and all, from the loose, often damp woodland soil. (And the younger they are, the easier they come out of the ground.)

More prolific are drifts of jewelweed (Impatiens capensis) that thrive in the moist soil in and around the brook. Unfortunately, they clutter up the streambed, obscuring the rocks and water; they also break up the lush, solid carpets of pachysandra and vinca on either side of the stream; and they invade the streamside paths, the lower causeway, the shallow sheet of water above it, and the upper causeway as well. When the jewelweed first appeared, in the nearly cleared ground beneath the cliffs (described in How Evergreen Was Created), it was a welcome gift of nature because it covered bare ground with a lovely pure sweep of ground cover. Now, of course, it’s covering up—actually, messing up—features more valuable than bare earth.

Happily, jewelweed is as vulnerable as it is prolific: You can grab whole handfuls of its soft stems and slide them effortlessly out of the soft ground; usually, every single plant can be removed from the brook site in just a couple of hours.

Other species are unwelcome because they’re in the wrong place. Pachysandra, for one. In most of the garden, it’s a well-behaved evergreen carpet neatly edging the paths. But it grows so vigorously in the rich, moist soil around the lower brook that it would overrun the footways if it were left alone. Every year, handfuls of it are simply torn out of the ground.

The plants, however, are so robust that, even with broken roots, they transplant readily—sometimes in spots elsewhere in the garden that could use more ground cover, but most often in the gardens of friends who welcome free plants.

Pachysandra is also removed where it threatens more colorful but (alas!) more vulnerable plants, such as variegated euonymus. In the Gold Room, for example, it infiltrates the sweeps of vinca ‘Illumination’ and ‘Emerald ‘n Gold’ euonymus after which the space it named. It also invades the yellow-and-green euonymus underneath the shapely witch hazel in the northwest corner of the garden.

Vinca is a justly popular ground cover at Evergreen, thanks especially to its lovely spring flowers.  But, like pachysandra, it’s weeded out when it threatens otherwise pure sweeps of an even more colorful ground cover, such as yellow-and-green euonymus—which is does in the Gold Room.

The popularity of hay-scented fern (a native volunteer plant) also depends on its location. The large sweep just outside the White Room, for example, is a cherished feature of the garden. It’s also appreciated when it sprouts in beds of pachysandra, thereby providing a welcome seasonal alternative to a less interesting ground cover.

Just like pachysandra, however, hay-scented fern is removed where it encroaches on variegated euonymus. A prominent example is the grand alleé of white-and-green euonymus through which garden visitors return to the driveway. The euonymus is most impressive when it’s fern-free, and monthly weeding is needed to keep it that way.

In other words, a plant pecking order is enforced at Evergreen:  In the event of a turf war, both ferns and vinca are favored over the common plain green pachysandra, but variegated euonymus is preferred over every competitor: ferns, pachysandra, and vinca.

Two other favored plants at Evergreen are two native evergreen ground covers that are slowly establishing a foothold: One is the ground-hugging patch of partridgeberry (Mitchella repens) in the large sweep of hay-scented fern outside the White Room. The other is the thickening carpet of winterberry (Gaultheria procumbens) just down-slope from the Northeast Niche. These plants are most impressive when competing plants (such as false Canadian mayflower and other spring ephemerals) don’t break up the unity of the mass. These intruders are carefully weeded out.

Evergreen’s trees and its hundreds of rhododendrons mostly thrive on neglect. But occasional pruning is required.

As the pine trees grow, limbs beneath the rising canopy die from lack of light. (See Pruning in How Evergreen Was Created.) Periodically tree surgeons climb high up the trunks and saw off the ugly dead branches, and we carry away the debris.

Each year a few rhody branches grow too close to the paths to allow visitors to pass by easily, so they’re also pruned back.

Many rhodies at Evergreen, especially those on the south, east, and west side of berms, receive enough sunlight to grow full enough to be attractive.

Others, especially those under thick tree canopies or on the north side of berms, catch so little sun that they grow sparse and leggy as they reach hopelessly for more light. The only way to make them attractive is to cut their scraggly branches all the way back to the main trunk, which make the rhodies look less like giant shrubs and more like small exotic trees. This was done to the group of rhodies in the deep shade near the entrance to the Gold Room and, to a lesser extent, to the specimens on the southern edge of the garden, along the path leading to the Cave.

Some of the gardening by subtraction at Evergreen is done in mid-fall, after the leaves have fallen from the hardwood trees. Most of it, however, is done in the spring, before the garden is opened to the public on the first weekend of June.

Almost all the debris cleaned up, weeded, or pruned at Evergreen is dumped onto four large compost piles hidden behind berms on the northern, eastern and southern edges of the garden.

Debris in the driveway and in the street is also raked up, but it doesn’t need to be wheelbarrowed through the garden to a compost pile. Because the driveway and street are accessible to motor vehicles, debris gathered there is dropped directly into the bed of a pickup truck and driven to the compost pile at the Goffstown transfer station. The truck bed is big enough to haul everything away in just one trip. 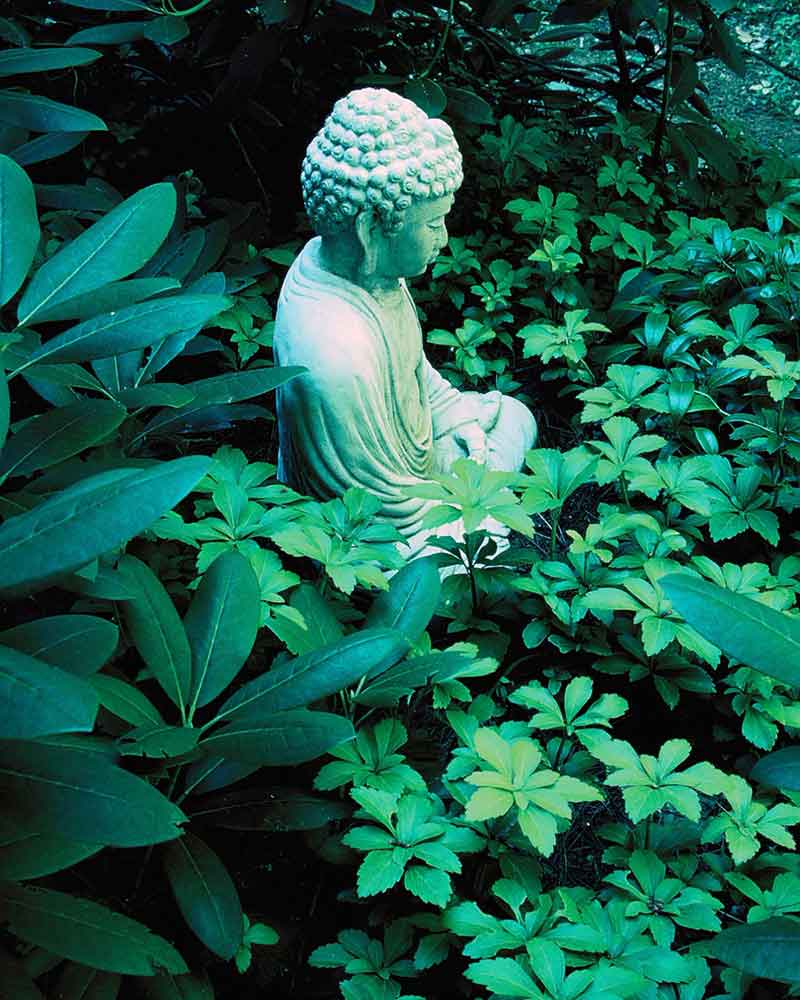 The Buddha meditates among rhododendrons and pachysandra